Clothing brand Fabindia on Monday was heavily trolled for promoting its new collection for Diwali which led them to delete the tweet promoting the same. The brand was accused of "defacing" the Hindu festival of Diwali by terming the collection as 'Jashn-e-Riwaaz.'
Many came down heavily on the brand for "unnecessarily popularising secularism and Muslim ideologies in a Hindu festival like Diwali."
The tweet featured models wearing the brand's latest Diwali collection and read, "As we welcome the festival of love and light, Jashn-e-Riwaaz by Fabindia is a collection that beautifully pays homage to Indian culture."
While some netizens described the tweet as "culturally inappropriate", others said that there was no need to infuse secularism into a Hindu festival. Many declared that they would not buy from Fabindia again.
It may be noted, the New Delhi based brand is not the first one to face backlash on social media for its collection. Tata's jewellery brand, Tanishq drew ire from a few sections of the society when it aired an advertisement promoting inter-faith marriage. Netizens called for boycotting the ad for "insulting religion."
Check out the responses of people here for the Fabindia tweet: 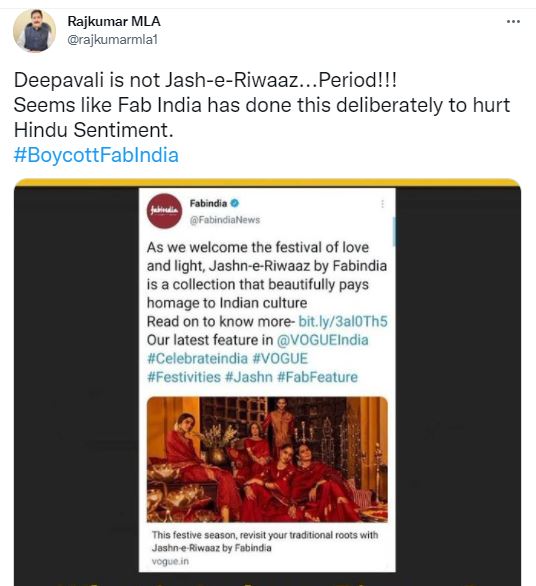 With so many people criticising the collection's name, there are some people who said that the brand had given its collection an Urdu name which is completely not harmful.