Messi had played 788 games for the club since the time he signed the first contract with Barcelona.

Footballer Lionel Messi will end his 20-year career with Barcelona after the La Liga club were unable to fulfil a new contract that had been agreed with the player due to "financial and structural obstacles".

A Barcelona club statement said, "Despite FC Barcelona and Lionel Messi having reached an agreement and the clear intention of both parties to sign a new contract today, this cannot happen because of financial and structural obstacles (Spanish Liga regulations)." 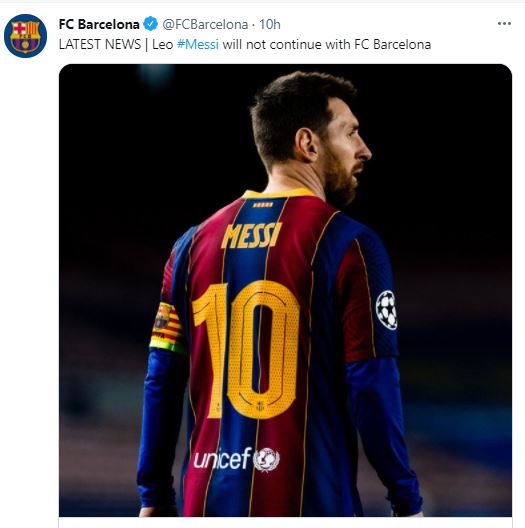 "As a result of this situation, Messi shall not be staying on at FC Barcelona. Both parties deeply regret that the wishes of the player and the club will ultimately not be fulfilled,” the club further added.

The six-time Ballon d'Or winner has officially been a free agent since July 1 after his previous Barcelona contract expired on June 30.

"FC Barcelona wholeheartedly expresses its gratitude to the player for his contribution to the aggrandisement of the club and wishes him all the very best for the future in his personal and professional life,” the club said.

It is to be mentioned that Messi last month finally landed a major international trophy with Argentina when they beat rivals Brazil to win the Copa America.

He had played 788 games for the club since the time he signed the first contract with Barcelona in 2000 on a napkin when he was just 13.

Meanwhile, Barcelona is labouring under debts of several hundred million euros and have been under pressure to reduce their wage bill. The club recently sold their left-back Junior Firpo to Leeds United and US international Konrad de la Fuente to Marseille.