The much-awaited SS Rajamouli's 'RRR' was released on Friday, March 25, and fans have already rated the movie. Netizens who enjoyed the movie's premiere took to Twitter on early Friday morning hailed it as a "masterpiece." Some even went on to claim that the movie is better than Rajamouli's blockbuster hit, 'Baahuli' starring Prabhas, Rana Dagubbati and Tammanah Bhatia in lead roles.
One Twitter user wrote, "One word - MASTERPIECE one of the best movies ever made in Tollywood. Congrats to the entire time for their unbelievable hard work. Both Jr NTR and Ram Charan have created a huge impact in the movie. #RRRMovie #RRRreview."
While another wrote, "I have never witnessed such an amazing start for the film. @ssrajamouli can only do this kinda stuff. I have never seen people giving standing ovation on interval. Movie pace is amazing from the very first scene has many seetimaar and Goosebumps scenes #RRR #RRRreview."
It may be mentioned that RRR is expected to be one of the highest grossers of 2022.
Here are some of the reviews: 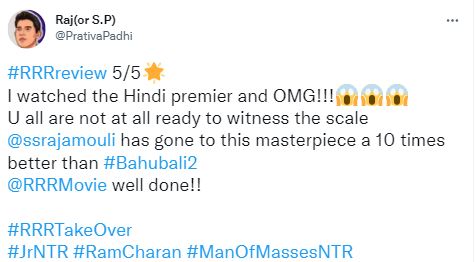 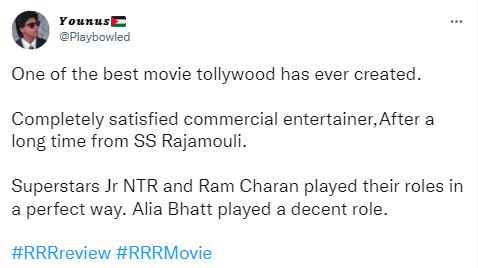 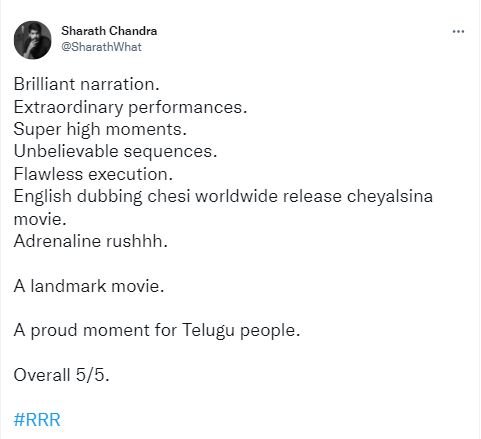 Famous Indian film critic, Taran Adarsh called the movie "terrific" and gave it four stars. He tweeted, "#SSRajamouli gets it right yet again… #RRR is a big screen spectacle that blends adrenaline pumping moments, emotions and patriotism magnificently… #RRR has the power and potential to emerge a MASSIVE SUCCESS. #RRRReview."
For those unversed, RRR is a fictional story inspired by Telegu freedom fighters Alluri Sitarama Raju (Ram Charan) and Komaram Bheem (Jr NTR). The movie is made on a whopping budget of Rs 400 crores and as promised, RRR has delivered a visual grandeur to its fans.
This is Ram Charan's second collaboration with SS Rajamouli. They earlier worked together on the 2009 fantasy action film Magadheera, which also starred Kajal Aggarwal.